GTA IV is the sequel to GTA San Andreas. This time, the game takes you back to GTA III’s Liberty City, an emulation of New York City. The story follows Niko Bellic, a war veteran trying to escape his past. This time, Rockstar included an online multiplayer version, which, as much as 32 players can engage in competitive and interactive gameplay. The game was available for PS3 and Xbox 360 in April 2008. The PC version launched in December 2008. Similarly, GTA IV has a compelling non-linear storyline. Perhaps its greatest selling point is the likable main character. Read on for a detailed review of free GTA IV, which is arguably the best action-adventure game that predates PS4.

GTA IV is the story of Niko Bellic, a Serbian who arrives in Liberty City to unite with his cousin Roman to pursue the American dream. But Roman had exorbitantly exaggerated his life. Roman claimed to be living in a condo frequented by girls with “big titties.” However, on arrival, Niko realizes his cousin runs a taxi firm and lives in fear of the Russian Mob. For instance, the story starts with Niko working for his cousin’s taxi firm. He meets Little Jacob and Michelle, who becomes his girlfriend.

Niko finds himself defending Roman from loan sharks on several occasions. Events force him to work for Vlad Glebov, a Russian loan shark. Niko kills Glebov for sleeping with his cousin’s girlfriend, an event that triggers the Bratva bosses, Mikhail Faustin and Dimitri Rascalov, to order the kidnapping of both Niko and Roman. Faustin orders Niko to assassinate the son of the most powerful Bratva member, Kenny Petrovic. Then Dimitri convinces Niko to assassinate Faustin to avert a gang war.

Niko never gets paid for the assassination. Instead, Dimitri brings Bulgarin, Niko’s former employer, who accuses Niko of stealing from him a few years back. A gunfight ensues, and both Dimitri and Gulgarin escape. Dimitri’s men destroy Roman’s taxi business and apartment, forcing the two cousins to flee to Bohan. Soon after, Michelle confesses she is a government agent and convinces Niko to work for her agency by telling him they’ll help find the person who betrayed his army unit. Similarly, the agency tracks down this man, Darko Brevic, and bring him to Liberty City for Niko to decide his fate.

One of his past employers, Jimmy Pegorino, asks him for a favor that involved closing a drug deal with Dimitri. Niko chooses the deal over revenge, and Dimitri betrays him again. In an attempt to kill Niko, Dimitri kills Roman. However, there’s nothing but revenge in Niko’s head. He goes through Dimitri’s men and kills Dimitri in an immersive gun battle. Pegorino is infuriated by Niko’s actions, and unintentionally kills Niko’s new girlfriend, Kate, at their wedding. A devastated Niko tracks down Pegorino and executes him. The plot is interesting, with many twists and turns.

The setting of GTA IV is slightly modern. The events of the game tale place in 2008 Liberty City. The city emulates four of the boroughs of real-life New York. The broker is Brooklyn, Bohan is the Bronx, Dukes is Queens, and Algonquin is Manhattan. Across the boroughs, is the independent state of Alderney, what would be New Jersey. Additionally, there are three minor islands: Happiness Island, Colony Island, and Charge Island, which are supposed to represent Liberty Island, Roosevelt Island, and Randall’s Island. You unlock the bridges as the game progresses and as you accomplish different objectives.

GTA IV’s gameplay resembles previous games in the series. You shoot, drive, and steal to accomplish objectives. After that, the story mode takes at least 30 hours to complete. However, a 100% game completion requires you to finish all the side missions, stunts, and buying properties. In this game, completing missions is much easier. To start with, Niko is more agile and strong than the characters in the previous games. He can scale and jump over fences. Additionally, Rockstar improved the gunplay in this game. Therefore, you can stick close to walls and parked cars during a gunfight. Rockstar introduced a cover system with this game.

The result was a seamless transition from cover to aiming and targeting. You can target a specific body, say the head for an instant kill. The melee attacks are also more sophisticated. Niko can dodge, block, counter-attack, and disarm an adversary. Another addition was the more forgiving authorities alert system. The cops don’t seem eager to bother an Eastern European war veteran who’s trying to reinvent himself in a new city. Another impressive feature is Niko’s mobile phone. You can access the phone at will. The phone helps contact friends, arrange dates, and, more importantly, call business contacts.

Niko is generally a good person with a dark past. Above all, war veteran in the Balkan War, he has skills that make him a perfect freelancer for people in the business of killing each other. Most of the time, his reluctance to carry out such orders is apparent. Still, he kills and commits other crimes with the hope that completing given missions will provide the means to achieve his goals. The main difference between GTA IV and its predecessors is that you can make a choice. Niko does not have to follow orders blindly. However, when making a choice, it is important to weigh the consequences of the boss discovering the treachery against the later use of the person you spare. The significant choices you make throughout the game alter the storyline. As such, you can play the game several different times for new experiences.

A lot to do outside the missions

There are a lot of things to kill time in GTA IV’s Liberty City. Similarly, some of these optional activities offer rewards, while others are solely for killing time. For instance, you can catch comedy shows at comedy clubs, watch TV, and surf the in-game internet on a computer.

Therefore, several multiplayer modes to choose from. Most of them are variations of the single-player mode. Still, the online version does not lack in variety. If you host the multiplayer mode, you get to choose the traffic levels, weapons set, police presence, location, and much more. After that, the options include Deathmatch, team-based crooks versus cops, Turf War, etc. With the right group of players, you’ll have lots of fun playing GTA IV online.

Admittedly, there’s less texture pop-in and pop-up compared to previous versions of Grand Theft Auto. However, in this sixth game in the main series, Rockstar should have already introduced mid-mission checkpoints. For short missions, at the beginning of the game, this is not an issue. But it reaches a point where you have multi-part missions. If you screw up, you have to repeat the mission from the very beginning, including long drives to the mission locations. 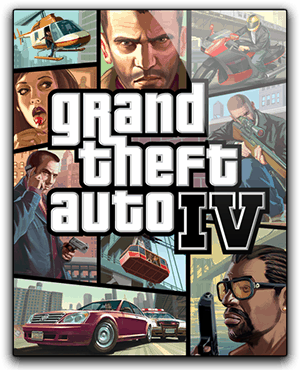 GTA IV is one of the best action-adventure games you’ll come across. Of course, its successor is much better. But GTA IV might be your best option considering it demands much lower specs compared to GTA V. Therefore, the best part about GTA IV is a varied storyline. Above all, you can have a totally different experience by making different choices in the story mode. Like with other games in the series, the minor flaws are greatly outnumbered by the impressive features.